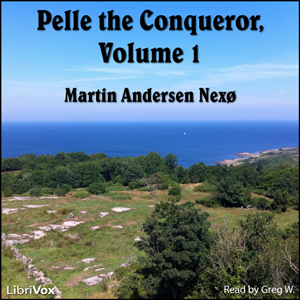 LibriVox recording of PELLE THE CONQUERER, VOLUME I, by Martin Andersen Nexø. Read by Greg W.

When the first part of "Pelle Erobreren" (Pelle the Conqueror) appeared in 1906, its author, Martin Andersen Nexo, was practically unknown even in his native country, save to a few literary people who knew that he had written some volumes of stories and a book full of sunshiny reminiscences from Spain. And even now, after his great success with "Pelle," very little is known about the writer. He was born in 1869 in one of the poorest quarters of Copenhagen, but spent his boyhood in his beloved island Bornholm, in the Baltic, in or near the town, Nexo, from which his final name is derived. There, too, he was a shoemaker's apprentice, like Pelle in the second part of the book, which resembles many great novels in being largely autobiographical. Later, he gained his livelihood as a bricklayer, until he somehow managed to get to one of the most renowned of our "people's high-schools," where he studied so effectually that he was enabled to become a teacher, first at a provincial school, and later in Copenhagen.

"Pelle" consists of four parts, each, except perhaps the last, a complete story in itself. First we have the open-air life of the boy in country surroundings in Bornholm; then the lad's apprenticeship in a small provincial town not yet invaded by modern industrialism and still innocent of socialism; next the youth's struggles in Copenhagen against employers and authorities; and last the man's final victory in laying the foundation of a garden-city for the benefit of his fellow-workers. The background everywhere is the rapid growth of the labor movement; but social problems are never obtruded, except, again, in the last part, and the purely human interest is always kept well before the reader's eye through variety of situation and vividness of characterization. The great charm of the book seems to me to lie in the fact that the writer knows the poor from within; he has not studied them as an outsider may, but has lived with them and felt with them, at once a participant and a keen-eyed spectator. He is no sentimentalist, and so rich is his imagination that he passes on rapidly from one scene to the next, sketching often in a few pages what another novelist would be content to work out into long chapters or whole volumes. His sympathy is of the widest, and he makes us see tragedies behind the little comedies, and comedies behind the little tragedies, of the seemingly sordid lives of the working people whom he loves. "Pelle" has conquered the hearts of the reading public of Denmark; there is that in the book which should conquer also the hearts of a wider public than that of the little country in which its author was born.(Introductory note to English translation - Otto Jespersen, 1913)